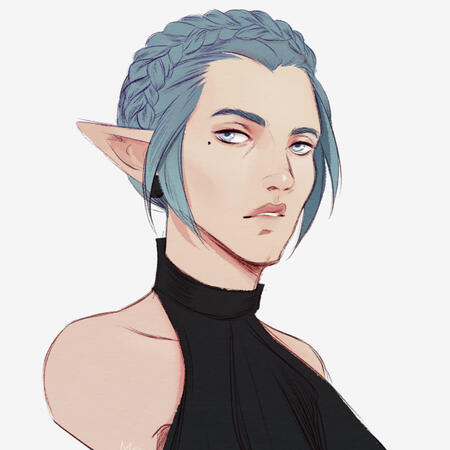 Deirdre Ta'ea is a sharp featured, cold-eyed Elezen. Of few words, preferring a run over basic human interaction, her actions will always speak louder. Malms of leg, wide hips & a stomach toned by obsession, she is strikingly beautiful and meticulous in maintaining her appearance.

Behind her looks is a veteran Garlean soldier now displaced (though few will ever come to know this). Cold, calculated and deadly her first instinct is often violence, though she is highly misunderstood and can be warm under the right circumstances; her habits of aggression beget caution. 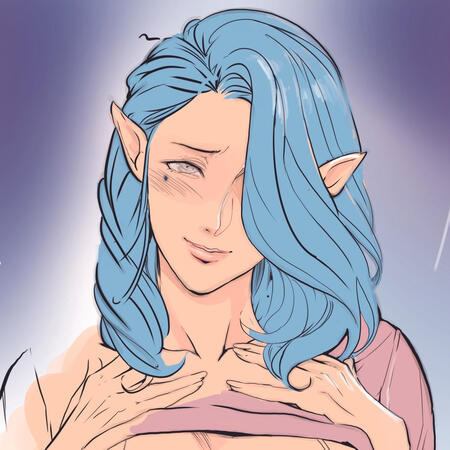 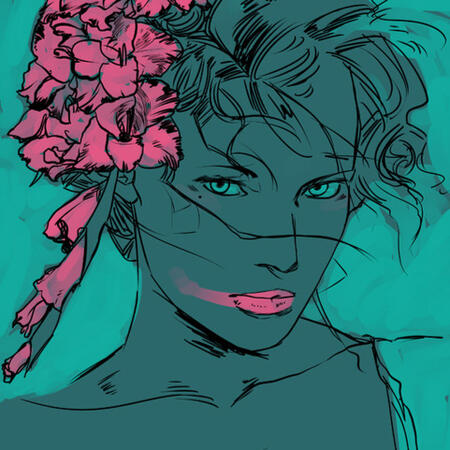 Born in annexed Garlean land, Deirdre lost her home young & landed herself within the Imperial army at the age of 14. A 20 cycle veteran she had earned her official citizenship over many, many corpses and participated in several high-level engagements including The Battle of Carteneau.

She spent several cycles in Eorzea as a spy for the Garlean Empire and returned to her homeland after the Ala Mhigan liberation. After the collapse of The Empire she finds herself lost and unsure of her purpose in life, kept safe only by her lover.

Even though she is very small-framed Deirdre is by no means skinny. Round hips, perky chest & toned muscles, she is flexible and lithe. While more power resides in her legs from training, her skill in archery also allows her arms a decent bulk of muscle. Despite having children, her stomach remains flat and toned due to her obsession with exercise & power. For her kin she is significantly shorter as a half-breed might be even with her pure blood, this is due to malnutrition at puberty that lasted long into her teens, and is the source of self-confidence issues.

Her single, subtle structural flaw is improperly healed ribs on her left side, causing a bump in naked flesh, only noticeable by a keen eye or intimate interactions. A seasoned warrior, she is suspiciously lacking in scars. A long recent scar runs from the left side of her neck down her back and under her bottom & the Garlean crest is burned into her right foot, the mark of Cartenau at the nape of her neck.

Azure strands weave and twist wildly when loose, hair as untamed as the woman. Her hair is usually only down when she is comfortable, or during an intimate moment. Otherwise, she keeps the long, unyielding locks of hair bound tightly on top of her head or braided, so it stays out of the way- ingrained in her during military training. When wet strands will curl all about thickly. Deirdre has not cut her hair in many, many cycles, making it uncontrollably lengthy. Secretly, she enjoys brushing & braiding her hair as a part of a strict routine, considering it a very intimate action if another does it for her.

Smooth & seductive, her words are enunciated particularly, her speech holding a light touch of accent. If she is focusing or distracted, this accent will thicken. This accent is pointedly NOT Garlean, but a mix of several languages that makes it difficult to describe or pinpoint. It will cause her to smooth out certain words and staccato others, please do not assume her heritage from her accent unless you have explicit consent, as she is well versed in several languages to the point of impersonating a translator.

Towards other people Deirdre will often come about as rude & hostile. She is very protective & tends not to allow people close to her. She will often remain silent but attentive, usually coming off as offensive. She is also a habitual liar, able to put on a mask and mimic emotions so accurately that if you are standing in front of her you might recognize them as your own.

To people she knows, Deirdre is less guarded. When they get to know her & she opens up, Deirdre becomes an entirely different person. She is very docile & shy, when truly relaxed she is a happy woman, smiling more often. This takes an immense amount of patience & time as it is not something that comes naturally to her, unlike her icy mask.

Deirdre is fairly uneducated in basic schooling, as she never received much of a formal education. Any knowledge she possesses she learned either on her travels, the military, from particular missions or undercover roles. She excels more in street, battlefield knowledge & things she needs to survive. Deirdre can speak, write & read Eorzean well, but will occasionally use words incorrectly, having a particularly difficult time understanding individuals with heavy accents or slang. Deirdre knows several languages including traditional Elezen, tribal Keeper, Ishgardian, Garlean, Eorzean & Sign.

Extremely close combat or surprise attacks. Deirdre is startlingly good at taking her opponents off guard with precise blows, creative moves & an endless pool of energy. She is also excellent with intensely ranged attacks, assisted by the keen eyes of her kin. Weapons include bows, daggers, pistols & rifles. There is an air of untapped magicks about her with the potential to flare out of control.

Deirdre is very weak against heavily armoured attackers with big weapons, though she will try to use her speed to counter this. She is durable, but not overly so, so one or two big hits could end most of her ability to fight. It is also easy to put Deir in a blooded frenzy, making her more careless than usual. She is not hard to rile up in most situations, which is why she is easily provoked & ends up attacking people randomly. 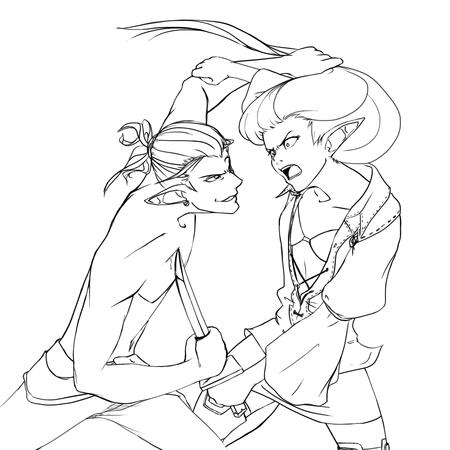 The Stab List was created as a fun way to track character rank and interaction. Due to her antagonistic nature & violent tendencies, she will group people into these categories.

If your character is not in this list, she may require more interactions or has forgotten them. If we recently RP, expect to see an entry soon after.

DO NOT base OOC or IC assumptions off of this list. It is for fun!

● Clawdia Dupuis: A bartender under her employ, though she sees possibility in manipulating her connections, she also sees the possibility of friendship. Already she admires the womans manners and dress, and will often watch her in order to mimic manners for her work at Pearl.

● Crexus Calvedus: A soldier she rescued from the clutches of The Empire. She considers him a fumbling child running around with a pair of scissors.

● Fate Lhas: A cycles old contact recently reappearing in her life, though she holds significant respect for their past, their is still timid apprehension on his purpose and loyalties.

● Jacob Ashwoode: Privy to secrets and drawn by their similarities, she finds him a curiosity, and easy to speak to. To what end, or what bets, remain undecided.

● Manon Crestbane: A Patron of Pearl whom Deirdre has grown an uneasy fondness. Though she does not trust her with truths, she seems to hold respect for the woman, and has a fondness for her sweets.

● Mivo'to Laaski: With the relentless attitude of a pesky little Miqo'te, she has begun toying with him to see how far he can be pushed. Amusement, and assessed at a low risk for danger, she might even admit he is amusing if pressed.

● Ramiel Saifionne: Mysterious, they seem to share a love for books and plants, but continually twist and turn around questions to further understanding. She finds herself leaning towards aggression with the man, and suspects something foul about him.

● Rhygar Styrmgarsyn: Soft yet gigantic, their brief conversations have formed a sort of social bond- even if she is still timid around him.

● ♥ Valentine Depardieu: Nervous about the way the woman commands the space around herself, she is especially anxious of the sexual energy she exudes. A knife will remain close around the Viera, and it has yet to be seen if they can cooperate, or will clash.

● Yssen Van: An old contact with whom she has clashed before, they may be working together once more, but if that will lead to more violence has yet to be seen.

● ♥ ♥ Cruor Grimguard: A deep and intensely growing relationship she is desperately trying not to fuck up, and somehow has managed not to yet. They currently live together in The Goblet, mutually trying to figure out the potential life they could create in a peaceful world.

● Navei Asumiere: Her previous lover, a relationship that crumbled cycles ago. They clashed during the battle of Ala Mhigo, where the Hyur failed to defeat her as he promised. Now, they maintain a distant, professional relationship, cautious of anything more.

● ♥ Toshikage Magotes: Deirdre's favourite bartender and romantic confidant. The two bond over good drinks and better food. She trusts her significantly, and the pair spends a lot of time hanging out outside of the bar.